I went on a tour of the Sriracha factory with my family.

They had this giant bin of their peppers by the door

with a sign that read “Take One”. I began stufﬁng them

pockets of my children. My husband, he took one.

Upon returning home, I became inspired to make a

until red jalepenos that they use in sriracha

sugar and water (I don’t measure, I just use the same

vessel to scoop them. About a cup each should do)

brought to a boil then lowered to a simmer.

Add a generous handful of cilantro and let it simmer

for about 5 minutes. Strain the cilantro and pour syrup

into a storage container and set it aside.

In a highball glass, add 1-3 rings of the sliced pepper

(seeds removed for a mild version), the leaves of 2-4

sprigs of cilantro and the juice of 1/4 of a lime. Use a

muddling tool (or the heavy handle end of a butter

knife) to smash the ingredients together in the bottom

of your glass. This step is important. Really crush the

crap out of them for the very best ﬂavor.

Add ice, then vodka, a shot and a half to two shot

should do the trick! Girls night in is not for sissies!

Add an equal part simple syrup to your vodka, top off

with club soda, give it a quick stir and serve!

You and your bests will be enjoying a fantastically

refreshing beverage with a kick and a kick! 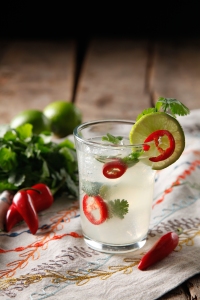