If “We the people” know anything, it’s that we are NOT The UNITED States of America. Quite the contrary, we are The DIVIDED States of America. Our leaders, corporate influences, special interest groups and egos have made that a certainty. They have made two sides of every argument and with the help of social media, have made sure that we despise each others varying opinions because we’ve been convinced that the other side is wrong. Not just different and entitled to their opinion but, wrong and bad for disagreeing. This is a problem.

Why would our leaders and elected officials perpetuate that rigid line of division? I think it’s to distract us from bigger and deeper issues that can never be addressed as long as we are “the left” and “the right”. We are bombarded with clips, snipets and videos that are meant to influence us. A video can be manipulated to make a person appear to be saying the exact opposite of what actually was said. We get hung up on details that don’t matter and we get ANGRY!

A perfect example of this is a recent video that’s been circulating of President Obama raising his coffee cup as a gesture of acknowledgement to two US Marines as he exited an airplane. I’ve seen it posted at least four times today with captions such as “What an asshole! How dare he not salute these men who would lay their lives down for this country!” And “impeach this man for disrespecting our valued servicemen!”. Seriously? Impeach? Geeze… Never mind that the president isn’t supposed to salute military personnel. He’s a civilian. We don’t salute these men and women. We thank them and support them and show respect but we don’t salute. The first president to break protocol in this way was Ronald Reagan. His advisors immediately chastised him, prompting him to take the issue up with General Barrow, the then commandant of the Marine Corps. General Barrow declared that as commander in chief, he was entitled to offer any gesture of acknowledgement that he desired, including none at all. It’s easy to judge a ten second clip, it’s harder to make ourselves remember that this man passes by military personnel a gazillion times in the course of his presidency and we can’t possibly fathom what that’s like. Another example is George W. Bush at the moment he found out that a plane had crashed into The World Trade Center. Do you get me? A plane crash. We had no idea at that moment that it was anything more than that. He came under so much scrutiny for being in a classroom, reading to children. Even more so for not immediately jumping out of his chair and running for… What? What exactly should he have done right then? Who are we to decide that? I personally, don’t feel it was inappropriate for him to finish the last few pages and excuse himself.

I guess my point is that we are getting nowhere fast. We pick our sound bite and run with it. We decide that the “other side” is wrong before we even hear what they’ve got to say. We’ve allowed ourselves to be influenced into a situation of us vs them and are missing the big picture issues in the mean time. It’s time for us to realize that the only way we are truly powerful is if we are indeed, united. We need to start listening more and shouting less. We need to take time to consider that other people’s situations and experiences can show us invaluable perspectives that we wouldn’t have the benefit of knowing if we don’t slow our roll and shut our pie holes. 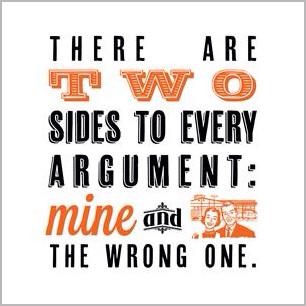