This recipe is a thing of the past. I know people still make it here and there but it’s not common, for sure. I remember being about ten or eleven and we were going to my grandma’s house for dinner. She announced that we were having ox tail stew… I was horrified. It seemed crazy to me. CRAZY! She didn’t take well to people saying they didn’t like things that they hadn’t yet tried and I didn’t want her to be disappointed so, I didn’t express my terror. I sat at the table and was served… to my surprise, it was the most tender stew I had ever eaten! Seriously, it was melt in your mouth goodness!

This was my grandma’s recipe as taught to her by her mother. My great grandma was taught to make it by her mother in law, my great great grandmother, full blooded Choctaw Indian, Nancy Ann Mullins. That woman, my great-great grandmother, was full blooded Choctaw Indian. She gave birth to fourteen children and raised two that were the result of the marriage of her husband, and sister. Her sister died in childbirth during the birth of her second child and she was sent to my great-great grandfather’s ranch to help with the babies in her sister’s absence. I don’t have any written family history to verify this, but according to my grandma, “They spent a lot of time together on that ranch, and they didn’t have cable in those days. So, they got together!” Thanks for that visual, grandma!My great great grandfather was Joseph Draper, rancher and preacher. In every picture I have seen of the man, he had his pistol, his bible or both! He and Nancy Ann along with their massive brood, must have been a sight to behold!

Anyway, the story goes that my GG Grandfather went to Nancy Ann’s  father to ask for her hand and her daddy said no. I mean, can you blame him? The last daughter died on his watch! My grandfather was tenacious, though! (must run in the family) He went back and told her daddy, “If you don’t let her marry me, I’m gonna shoot your cow!” Them’s fightin’ words! That must have been BIG SHIT back then and her daddy still said no! Well, being a man of his word, he went back over there and… you guessed it! He shot that man’s cow! Now, I don’t really have more details but what I know is this, it worked. My great-great grandfather married his first wife’s younger sister and ate the very cow he shot at the wedding. I’m not entirely sure about the whole eating the cow part, but my grandma said it in a sort of joking way and she’s no longer here to ask. Thankfully, they got married because they went on to have a whopping 14 children together one of which was my great grandpa Andy.

Don’t be afraid of this, guys. It’s really very good, and remember… Grandma doesn’t like it when people say “Yuck” to things they haven’t tried. Swearing Mom out.

This is what three pounds of ox tail look like. Looks a bit like short ribs to me. 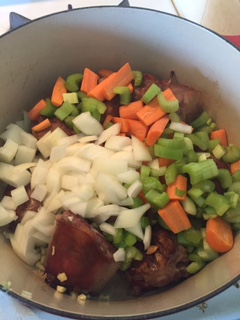 After you’ve seared the meat, add the color! 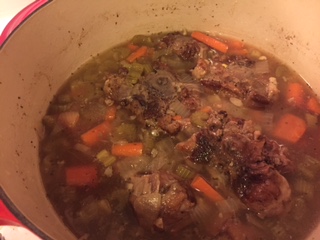 Like the Beastie Boys said, slow and low that is the tempo!

Just try to resist nibbling on this tender and succulent meat! 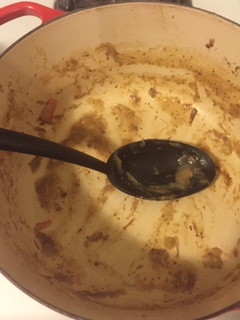 In case you were wondering if my family enjoyed this…